In this video, we see John Britt showing us how he creates funnels for pour over coffee.

John Britt is a studio potter in Baskerville, North Carolina. John is a self-taught potter who has taught and worked extensively at many locations including at Penland School of Crafts. John is also the author of The Complete Guide to High-Fire Glazes

and The Complete Guide to Midrange Glazes

. John’s work focuses on experimentation with glazes in different ranges and colors.

Making a Funnel for Pour Over Coffee

John starts by using a pound of clay and quickly centers it on a bat on the wheel. He decides on the circumference of the base and then proceeds to open the form with one hand at an angle. John leaves 3/8ths to a 1/2 inch of clay at the bottom so he can trim out the resting ridge that will sit either on the inside or outside of the cup below the funnel. He pulls up quickly and opens the form to flare out instead of going straight up like a cylinder. John leaves a ridge of clay at the bottom of his funnel so it can rest on a cup or whatever you are placing the funnel on, cleans up and defines that ridge using a rib, and then proceeds to pull and shape the form to flare out like a funnel more using a rib. He cleans up and finalizes his rim and then takes the piece off of the wheel to set up to trim later.

John then places a new bat on the wheel to show how he trims an already thrown funnel. He cleans his hands to ensure he does not get dusty or mar the surface of the form. John then expertly centers his funnel using only his hands to tap it to the center while spinning the wheel. He trims the top back slightly to clean it and then establishes where he wants to ridge on the bottom to be. This ridge will either rest on the inside or the outside of the mug. It just depends on your design and preference. Once John has finished establishing his ridge he goes in with a fettling knife

and cuts four holes in the bottom for the coffee to pour through later. He states that you can also use drill bits to create the holes and make patterns or slots if you wish.

John continues on after the holes to attach a handle to the funnel for an interesting design if people wish to hold the funnel. He slips and scores the handle and the location on the funnel and then attaches and pulls the handle using water and his hand to shape it to the form better. Once John is done and the handle is attached he uses his fingers to clean and smooth around the attachment points and the funnel is complete. In this video John Britt shows us how he creates a one piece lidded jar. 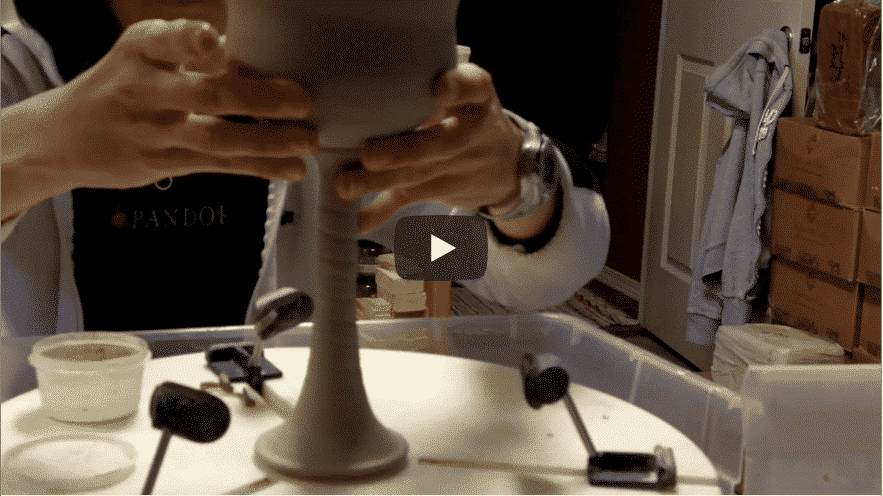